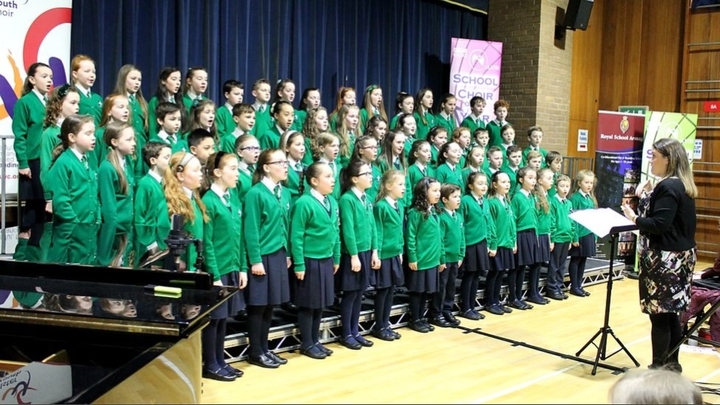 St Ronan’s Primary School was opened in 1994 to cater for the expanding Catholic primary population in the north east area of Newry. Since opening it has been led by three principals, the most recent of which, Mr Kevin Donaghy, is now in post for approximately 18 months.

The school has seen a steady rise in pupils, from approximately 391 in 2013–2014 to 406 in 2017-2018, and the school is now oversubscribed and has a waiting list. P1 has a 3-class arrangement and all other year groups have a 2-class structure. Class size tends to be large, as the school has now reached the capacity of its accommodation. The pupil teacher ratio has been around 26 for the last five academic years.

The school is situated adjacent to Sacred Heart Grammar School, and the two schools share part of a driveway. However, St Ronan’s Primary School has dedicated car parking for staff and parents, with a drop off zone in operation. The system appeared to work smoothly in the morning and the afternoon. The school building is effectively maintained, and careful use is made of available space. The school and its grounds are impressive, and credit is due to the building supervisor and his staff for their work in this regard, especially considering the inclement weather that was present for most of the winter and spring period.

The school has been on its inclusion journey during the last eighteen month period which was enabled by the appointment of Mr Kevin Donaghy who successfully led his previous school through the Inclusion Quality Mark journey.

St Ronan’s Primary is a Catholic Maintained school and the core values of catholic education are very much in evidence in school documentation and in the culture and values of the school. Over the last number of years, the school has embraced diversity as part of its inclusion journey, and small numbers of pupils are now attending whose families originated in other countries. More recently this has included the school welcoming children who are Syrian refugees. Although this has brought considerable challenges, the school is continuing to work to meet the unique needs of these children.

One of the most exciting aspects of the school’s inclusion journey is through the Department of Education signature project, Shared Education. St Ronan’s is paired with an integrated primary school from the Banbridge area. There is a considerable buzz around this project from parents, staff and pupils, even though the engagement is only underway from January 2018 onwards.

“The principal has been in post a relatively short time and has in that time provided the leadership and vision in terms of the digital journey the school is undertaking.”

“There is evidence that digital technology is central in all curriculum and assessment delivery across all year groups and curricular areas.

Online environments are used to support a wide range of learning activities within and beyond the classroom: Class Dojo is in use as a means to record behaviours but is also used for sharing information with parents.”

An Example to Others

St Ronan’s Primary School has made considerable strides in its inclusion journey and though the school development planning process. It is an inclusive school that stands as an example to others of inclusion within the Newry Area. I am confident that as the school continues to further develop and enhance its practice in the area of inclusion it will become a beacon for inclusion.

On the date of the assessment I was met at the front door by the Principal and a small group of pupils. Following initial discussion with the Principal and Vice Principal, I enjoyed the opportunity to engage with a wide range of those involved in the life of the school. This included a group of Prefects and members of the School Council who provided me with a tour of the school and its grounds. This group of pupils (Maria, P6; Roś, P7; Tom, P6 and James, P7) were enthusiastic about all aspects of their school and the education they received. They served as ambassadors for the school in their professionalism and maturity as they carried out this task. I also spoke with parents, teachers, classroom assistants, groups of pupils (some who had special educational needs), lunchtime staff, office staff, caretaking and cleaning staff.

Children were Engaged in Their Learning

I was also able to spend time in the classes undertaking learning walks and viewing lessons. It was clear from this process that the children were engaged in their learning and many of them showed a sense of wonder and amazement in what they were learning. There were some significant highlights over the course of the day, as I was able to engage one of the P1 classes in a story telling activity and join with a P4 class in a thinking and listening skills activity. Thanks to the teachers for allowing me the opportunity to engage with the pupils. I was also pleased to be able to view the work of some of the pupils in their notebooks, hear singing being practiced by the P7 pupils, and hear some poetry that had been performed by pupils at the Newry Fèis (some of whom came top in their categories.)

At the end of the day, the key findings were shared with the Principal along with some suggestions for areas for development, before a period of reflection and the report being written.

As school closures take effect across the UK we are responding to this change by offering our services online where possible whilst still enabling schools to work with Inclusion Quality Mark in furthering their inclusion journey.

Taking into account the amount of effort and commitment from colleagues in schools in preparing for Centre of Excellence and Flagship reviews, we are suggesting carrying these out online if the school wishes. We will be in touch via email to discuss the process with you. If this is something you wish to avail of, please get in touch with us to make the arrangements. We can do this on the date you have originally booked or can book a new date if it is more convenient for you. We would strongly recommend that you continue to submit your paperwork as normal and we will feedback on this to you.

All one day assessments have been cancelled until further notice. We would strongly recommend that you continue to submit your paperwork as normal. IQM staff will be working from home during this period and will be able to feed back to you on any paperwork submitted. We will monitor the situation and will be in touch with you in due course to rebook assessments.

Two day assessments are being treated differently – see below

Day 1 – Will be conducted online via Zoom and telephone calls with the school receiving an interim report to include their Inclusive School Award confirmation where applicable.  For those schools interested in Centre of Excellence status, the school will then be asked to complete a COE Action Plan and submit.

Day 2 –  A visit by the assessor to the school once the school is back up and running at a mutually agreed date with a report to include the interim report.

If your school has registered to do the award but is not at the assessment stage and you are working your way through our Self Evaluation Report document, please feel free to submit one or two elements at a time for feedback to elements@iqmaward.com and members of our team will continue to feedback as normal.

Look after yourselves and stay safe.